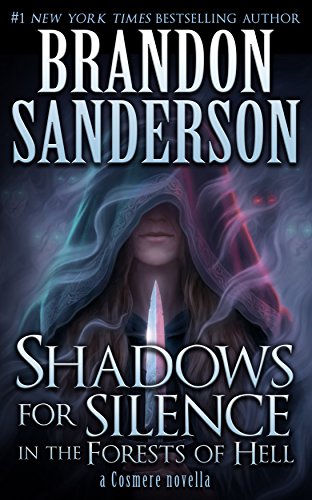 Hiyo, everyone! I’m still recovering, but I thought I’d share my thoughts on a novella I read recently: Shadows for Silence in the Forests of Hell by Brandon Sanderson. That name is a bit of a doozy, so I’ll just be calling it Shadows for Silence for the rest of the review. =p Shadows of Silence was originally written for the anthology Dangerous Women edited by George R.R. Martin and Gardner Dozois. As usual, I plan to avoid spoilers where I can but to cover the premise of the story.

The story takes place on the smaller continent of the world of Threnody, which is dominated by forests haunted by somewhat-sentient ghost-like creatures called Shades that are known to viciously attack people in certain circumstances. It begins at a waystop – in this case, a safe-haven from the shades where all are welcome – with two men discussing the dangerous and notorious bounty hunter named White Fox while one of them weighs his chances with Silence Montane, the woman who runs the waystop. Little do either of them known that Silence is actually responsible for the bulk of White Fox’s work.

But Silence, our protagonist, knows, and she also knows that a dangerous criminal with a huge bounty on his head is present at the waystop, disguised as a merchant. In something of a financial pinch, Silence, with the help of her daughter, William Ann, decides to use a light poison on the merchants to disorient them so they can kill the criminal at night, after he has left, and collect the bounty on his head. This puts them at great risk of drawing the attention of the Shades, whose ire is earned by starting a fire, drawing another’s blood, and running at night. Needless to say, Silence’s plan becomes complicated when unexpected events occur – but that’s all I’m saying for now!

I really liked Shadows for Silence in large part because of its haunting atmosphere and morally gray characters. Even though we didn’t spend much time with her, I felt Silence received strong character development, and I couldn’t help but blaze through the story. I would love to see more of Threnody. The idea of a world dominated by all sorts of latent horrors is super appealing to me. As usual, Sanderson does a good job keeping the story interesting and surprising. While few characters other than Silence herself receive too much development, I felt some were really relatable, especially Sebruki, a young girl whose family was murdered by the criminal Silence was chasing. While Shadows for Silence didn’t have the same striking impact as The Emperor’s Soul did for me, it was a great read, so I rate it 4.8/5.

Have you guys ever read Shadows for Silence? If so, what did you think? Do you know of any other series with eerie atmospheres? (The world of Sabriel fits the bill, and I liked that, too!) Let me know in the comment below! Have a wonderful week!

Hiyo, everyone! I’d like to apologize for not updating in a while; health issues have been getting the better of me, and to be honest, it will still take me quite some time to fully mend. Nonetheless, I’d like to review an anime I managed to watch while healing: Recovery of an MMO Junkie. As usual, I intend to keep spoilers to a minimum, but I’ll discuss the premise of the show. Here goes!

Our protagonist, Moriko Morioka, is a thirty year old woman who quit her job after becoming fed up with ‘real life’ and decided to become a ‘Super NEET’ who lives through MMOs. She plays a game called Fruits de Mer as a character named Hayashi, a male warrior-style character. She’s part of a small guild including a character named Lily, a healer who becomes one of her closest confidants despite neither of them knowing the other in real life.

To no viewer’s great surprise, eventually Moriko coincidentally encounters Lily’s player in real life, a businessman named Yuta Sakurai. Naturally, neither knows who the other is. Eventually, they (literally) bump into each other and Moriko falls over, briefly landing her in the hospital with a contrite Yuta at her bedside. The two exchange numbers, ostensibly so Yuta can check up on Moriko, but the former finds the latter taking up more and more of his thoughts. Eventually, events transpire that hint that the two know each other better than either of them realizes…

And that’s all I’ll say for now! Recovery of an MMO Junkie is a short (10 episode) slice of life anime, so it would be unfair to expect it to provide a profound, iconoclastic worldview, but it does succeed at being what it tries to be – cute, and funny at times. It was a nice, fun little show for me to watch while I myself was recovering. It does have the downsides of being predictable and, in the end, feeling like an incomplete story, and it may be difficult to get into if you aren’t at least a little familiar with MMO culture, but I found it charming enough to make up for those faults, and as an MMO player myself, I enjoyed its nods to the genre. I therefore rate it 3.7/5. It’s a nice little anime to watch if you’re into MMOs and want to enjoy something cute.

Have any of you seen Recovery of an MMO Junkie? If so, what did you think? If not, have you seen other MMO-based anime or played any MMOs yourself? Let me know in the comments section below. I’m not certain if I’ll be able to post next week, but I’ll try my best! Until next time, I hope your lives are epic!